This was and interesting mural project in the CBD of Sunshine Victoria. The project was driven by the Sunshine Business Association in conjunction with Brimbank City Council with the surrounding private businesses as stakeholders. The brief was to transform a laneway in the heart of town, from a rubbish-laden, graffiti-strewn and avoided area into a usable and enjoyable thoroughfare. The businesses in this area are predominately Vietnamese or Chinese, so following consultation, it was decided to decorate the laneway with Good Luck images from these cultures. We decide to paint a large Dragon – Phoenix motif on the largest section of wall, and Bamboo on all the smaller sections, with the surrounds a rich red trimmed with gold. For the southern wall which is made of large glass windows, I designed a series of adhesive decals with images of a Lucky Cat, Money Frog, Blossom and another Dragon. Over the course of a week in January 2016, and with Brigid Courtney as a helper, we transformed the Alley way into what has become a vibrant and well used corridor. This project won a Highly Commended prize at the 2016 Mainstreet Australia awards. 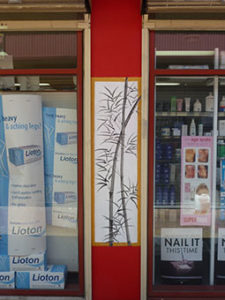 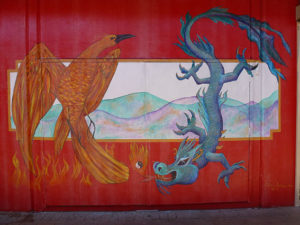 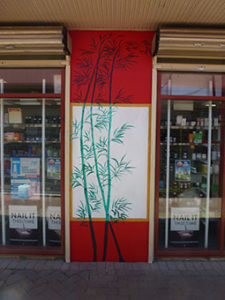 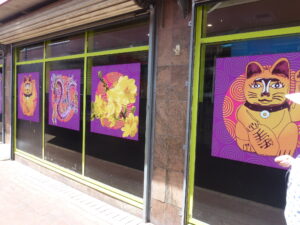