Robert Jackson is a visual artist, multi-skilled musician and performer. He has been active since the 1970s.

Painter Robert’s main inspiration is the Australian landscape with its sense of space, forgotten and remnant areas, encroaching suburbs and industry, and is an exploration of the concepts of “Presence” and “Absence”: i.e. Is the presence of a factory the absence of a natural landscape? Is a natural landscape just the absence of humans? His recent work has focused on a distillation of landscape into its distinctive elements to examine the concept of identity and place. What makes “Here”, here? What makes a place distinctive?
As a professional artist he has produced many artworks for public and private clients, including councils, government agencies, festivals and businesses. He has had several solo exhibitions and has produced many murals.He has been Artist-in-Residence at: The Hunt Club Community Arts Centre in 2006, Keilor Art Shed in 2013, St Albans SC in 2007, 2103 and 2107, & Waterside Blacksmiths Festival 2013, 2017. Robert has held several teaching positions including at Collingwood Tafe, Prahran Tafe, John Bolton Theatre School. YMCA Avondale Heights, Yarraville Special School, Lynall Hall Community School, and has taught music privately for many years. He was painting tutor at St Albans Community Art Centre in 2018.

Musician Robert studied Composition at the VCA after a BA(hons) in Linguistics at Latrobe University. Playing guitar and saxophone, he has been a featured soloist at Melbourne International Arts Festival and many contemporary music events. He has an abiding interest in the art of Improvisation, which he has studied extensively. In the 1980s he was a founding member/co-ordinator of The Melbourne Improvisers Association Inc., which promoted original music and was a committee member of the similar Make-it-up Club. He has played in a multitude of Rock and Jazz bands and been MD/Composer for Circus, Film & Theatre. He held the part of Weasel in the Australian Shakespeare Company’s production of “Wind in the Willows” for 10 seasons. He formed the band “The Legless Lizards” in 2006 to create original music inspired by the landscape of the Western Plains. To date they have produced 6 CDs.

He is an active member of the Community. He was President of the Albion Ardeer Community Club, a committee member of Friends of Iramoo, and has sat on several advisory boards: Including The Brimbank Arts Advisory Committee, The Eco-living Centre steering committee, the Albion Neighbourhood Plan Community Reference group, and the South Sunshine Arts Precinct Advisory Group. He is responsible for archaeological surveys being conducted along Kororoit Creek in Albion and several other sites. 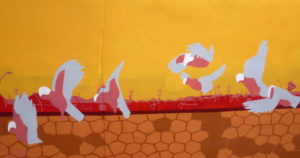 Other Specialist Skills and Knowledge

Many private sales of paintings
– His work is represented in private collections in London, Milan, Cleveland, Stockholm and across Australia.

Since the 1980s, Robert has been a freelancing artist, musician and actor and has worked nationally at Corporate Functions, Festivals, Parties, Shopping Centres and Sporting Events.. Some highlights include: 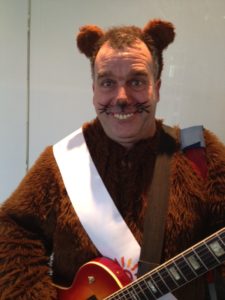